In addition to (or instead of) touring the London landmark sites of your choice, why not try one of Tim’s bespoke tours. These can be tailored to your individual interests, based on one of the following themes and lasting 2/3 hours.. 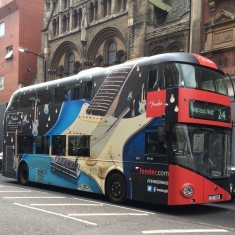 From the 50s to today, London has been the city for the greatest rock & pop talents to; perform, record, pose, misbehave, get clothed & hang out. Why not join me (an accomplished rock musician) for a stroll through the highs & lows of Soho’s rock world. We will see where  The Beatles last & Jimi Hendrix’s first gig were staged, Ziggy’s photo shoot, The Sex Pistol’s abode, The studios where ‘Bohemian Rhapsody’ & ‘All Right Now’ were recorded, plus the offices where ‘Your Song’ and ‘Oliver’ the musical, were written. Spot the pub where the Stones met & the basement studio where they made their first recordings. We will end up in Tin Pan Alley were Adele first played, it’s now the centre of the vintage and classic guitar district.

Plus so much more … and remember I am a musician, so we may meet some of my “Muso”  chums.

Luvvies and Legends of the London Theatre

We will stroll through London’s West End, the theatre capital of the world, starting at Middle Temple hall, the venue of the first performance of Shakespeare’s Twelfth Night, on 2nd Feb 1602. Then on to London’s first electrically lit theatre, the theatre where Count Dracula’s creator Bram Stoker was stage door keeper. Let’s imagine the “Molly” houses located near “Oh so fashionable” Covent Garden, then on to the Actor’s church of St Paul’s where we will definitely meet some theatrical ghosts & possibly Jones the church cat. We’ll ‘doff’ our cap to Jane Austen, say ‘Hello!’ to David Garrick (The father of modern theatre), walk down the real Diagon Alley and visit as many of the 40 plus theatre venues as we can.

Remember I am an actor, so we may meet some of my “luvvie” friends

…and who knows who or what else!

A theatre history walk through Elizabethan London to give a flavour of the ‘Bard’ and his life. We start in the historic coaching inn, The George, then on to Southwark Cathedral, the burial-place of Edmund Shakespeare. We will consider the Bishop of Winchester’s ‘geese’ and the 50% royalty he took from the Globe theatre. Let’s explore the remains of The Globe and The Rose Theatre and the reconstructions of the Globe & Sam Wanamaker Theatres. Across the Thames takes us to Blackfriars and Shakespeare’s house. Stroll past the 7 ages of man, the Mermaid, (one of the City’s last theatres) and on to Middle Temple Hall, the venue for the first performance of Twelfth Night, on 2nd Feb 1602.

…and we will see and talk about so much more!

The Shoreditch Scene: so hip it hurts

Shoreditch is one of London’s most hip & happening areas. It’s edgy, but totally safe to explore. So, let me show you the plentiful craft and artisan food stalls of Spitalfields’ market. It’s the city’s street art centre with work by the latest ‘bleeding edge’ artists plus 2 Banksy works for you to enjoy. We walk through areas famed for their immigrant communities; Flemish weavers, Chinese sailors, Jewish refugees and more recently the Bangladeshi community have all contributed to the exotic tastes & smells of this cultural hub. Brick Lane offers the best curries in England, some say the world! The remains of Shakespeare’s Curtain Theatre rubs shoulders with Damien Hirst’s ‘Cow in Formaldehyde’. Roman skeletons find themselves under glass, next to the world’s first pop up shopping mall. It is said there are more beards here than in any other London neighbourhood! Not bad for an area named after the sewer ditch that surrounded the Roman city of Londinium, it has come a long way in the last 1600 years.

In this walk we chart the life & times of Charles John Huffam Dickens, the most influential & charismatic author of the Victorian period. We stroll the same streets that Dickens trudged to gain inspiration for his 100 plus books and articles. Starting in Bloomsbury’s Fitzroy Square where the 11 yr old Charles lived whilst his father was in the Marshalsea debtors prison, we continue past the work house that inspired Oliver Twist’s home.  To escape debts the family frequently moved and we pass many of their places of work and rest, down dimly lit alley ways and cobbled streets.  Our destination is Doughty Street, now the Dickens Museum, where Charles, his wife Catherine and Charles Junior all lived. Here we see the desk upon which he wrote Pickwick Papers, Nicholas Nickleby & Oliver Twist.  There are many other personal artefacts to explore plus the Cafe & Shop. As an actor, I have often portrayed the author at the Museum of London.

The walk takes approximately one & a half hours, the Dickens Museum three-quarters of an hour and there is an entry charge for the museum. 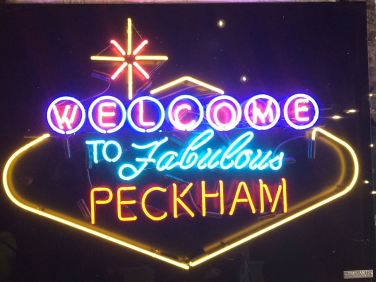 “Frank’s bar in Peckham is the hippest place in London” commented Peter York (Harper & Queens and the Independent’s style guru)  He may well be correct, perched as it is on top of a 1960s concrete multi-story car park. On a summer’s evening it offers one of the most spectacular and unlikely views over London.  The arrival of the ‘Hipster Express’ in 2007, brought ‘Beardos & Weirdos’ from Hoxton, Islington & other cool London places to make Peckham the next big thing. Previously famous as the home of the TV Sitcom ‘Only Fools & Horses’ you could visit Dell Boy & Rodney’s local ‘The Nags Head’, but now you are more likely to encounter the latest Pop Up restaurant, or street art by Phlegm or Thierry Noir than see their 3 wheeled Reliant Regal Van. Christiaan Nagel’s mushrooms grow on a high street roof and the Bussey cricket bat factory is now an arts hub, yoga sanctuary, alternative theatre & rave venue. As a Peckham resident I will guide you through the coolest place in town. You may even want to sample a cocktail at Frank’s or John the Unicorn?

The walk lasts approximately 2 hours, how long you stay at John the Unicorn is your choice!

Up Up and Away: Aviation London

We start at the Science museum, home to the first transatlantic aircraft, the magnificent 1909 Vickers Vimy bi-plane of Alcock & Brown. Nearby a Mk1 Spitfire & Hurricane are displayed along with one of its rocket powered adversaries, the Messerschmitt Komet.  Of course there is a Wright flyer, but there are also rockets & satellites from the UK’s abandoned space programme.  We can see Amy Johnson’s Tiger Moth that made the first solo flight to Australia piloted by a woman. Three vertical take off prototypes are lovingly maintained, as is the Apollo 10 Command module, Snoopy, the only one outside the USA.

A short walk or tube ride across Hyde Park brings us to the glorious, but controversial bomber command memorial. Then into Mayfair and the home of Charles Rolls, half of the duo synonymous with aero engines & tragically the first UK air fatality. We can see Tommy Sopwith’s house, his company supplied over 18,000 planes to the newly formed RAF. The Eagle Squadron statue in Grosvenor square, is a reminder of the US volunteers who flew Spitfires in Europe before their country entered WWII. Another US citizen, Harry Selfridge is acknowledged, as his store displayed Louis Bleriot’s first cross channel plane in both 1909 & 2009.